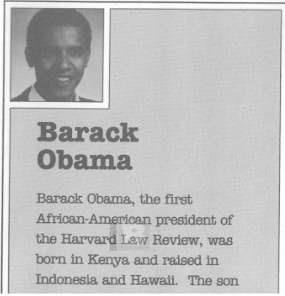 Miriam Goderich, whose literary agency described eventual-President Obama in 1991 as having been born in Kenya, said today that the description reflected "a simple mistake and nothing more."


"You're undoubtedly aware of the brouhaha stirred up by Breitbart about the erroneous statement in a client list Acton & Dystel published in 1991 (for circulation within the publishing industry only) that Barack Obama was born in Kenya," Goderich said in a statement to Roll Call. "This was nothing more than a fact checking error by me -- an agency assistant at the time." Roll Call's Taegan Goddard added, for disclosure, that he is "a client of the same literary agency."

Which leads to the question: why did she think he was born in Kenya?  And why did Obama not correct it at the time?
Why do stories about Obama's past change or, other then his two biographies (which are now shown to be partly fictional), is there so much that's unknown about him?   Why do we have a President, for God's sake, who even now, nearly four years after his election, is still so much a mystery?

We have a man who makes very specific promises about creating five million new jobs in the Green Energy industry and two million jobs rebuilding roads, bridges (see video of construction work going to China) and schools and who comes nowhere near fulfilling those promises and blames veryone but himself.


Roger Simon also wonders where the literary agent got the idea that Obama was born in Kenya.

But why did Obama’s agents think he was born in Kenya? That’s a more interesting question. (Obama, of course, is a liar either way.)
I will leave aside for the moment the question of whether he vetted the agent’s material himself. As the author of eleven published books and seven produced feature films, I have had plenty of dealings with agents and publicity people and always looked over the bios they had written about me. Every author I ever talked to about it always did too. We’re those kind of egotists. But I have no way of proving that Obama did — although I would faint if he hadn’t.


But whatever he did, the question remains. Why did they put “Born in Kenya” in his bio and leave it there until 2007? The latter part of that question can of course be ascribed to normal human sloth, but the first part — there’s the rub.


Here are the explanations I can think of:
1. Obama told them.
2. It was in some early draft of Obama’s abandoned book (Journeys in Black and White) he submitted to them.
3. Obama wrote it in his book proposal to them.
4. Obama told them in a query letter.
5. Obama answered one of those biographical forms.
6. … Well, I’m running out because they all amount to the same thing.


There is one other possibility. The agents simply made up the place of Obama’s birth, but I have never in all my life heard of a literary agent doing such a thing. It’s possible I suppose, but hardly likely. And why?


Anyway, per Occam’s Razor, I am going with the obvious — the agent’s source for Obama’s birthplace was… Barack Obama.
But again why? Why would he lie about where he was born?


…..
My wife Sheryl and I, like Nick and Nora Charles, discussed it over gimlets this evening. We both agreed the mystery lay somewhere in Obama’s college and university years at Occidental, Columbia, and Harvard. We knew, as you do, there must be an explanation for why the court eunuchs of the mainstream media have never bothered even to investigate the scholastic career of the most powerful person in the world.


Because Obama got bad grades? Yawn — so did Bush, Kerry, Biden, Ted Kennedy, and dozens of others who later found themselves making life or death decisions over our lives.


No, it had to be something more significant, more potentially dangerous. What if, we thought, as others have suggested, the reason Obama’s school records have not surfaced is that he enrolled, at one of those institutions at least, as a foreign student — a Kenyan?


But why would he choose to do that? Well, maybe for a grant, a subvention, a scholarship that was available uniquely to students from Africa or similar locales.


Yes, I know that’s not “fair,” in the lexicon of the Lord of Fairness, to have adopted a phony identity and deprived others of an opportunity they may have more richly deserved. But it would certainly fit with Obama’s early need to be recognized as a Kenyan by his agent and, presumably, his publisher. As we all know, it’s not the crime, but the cover-up. (In this case, actually, it’s both.)


As time went on, of course, college drifted away and politics reared its head. The Kenyan identity became less necessary, even a liability, so it was dropped.


I don’t know about you — but this makes sense to me. It also fits with the tomb-like silence around his college years.

Fascinating!
Posted by Moneyrunner at 8:05 AM