Kicking it up a notch

So, it looks like, in 2021, after the craziness of 2020, the craziness is being kicked up a notch. Where a president speaking to his supporters at a rally is now an impeachable offense, and a guy taking selfies in the Speaker's chair is the gravest threat to democracy since-- oh, I don't know, maybe since the Germans bombed Pearl Harbor, and the 25th amendment must be invoked RIGHT NOW and Trump must be impeached RIGHT NOW even though he's only got two weeks left in his term of office. We haven't just lost our minds, we've put them in a weighted canvas bag, taken them out into the Pacific and dropped them into the Marianas Trench.

I don't mean to minimize the violence, especially not against that poor woman who was shot at point-blank range by a Capitol police officer, but after a summer of burning cities, looting businesses, toppling monuments, widespread vandalism, and billions of dollars of property damage, this all sounds like an immense overreaction. I mean, seriously, the Democrats are running around with their hair on fire calling the protests a "coup" and an "insurrection", an "invasion" and "an attempt to overthrow the government" ???. Like the crowd was going to set up some guy wearing buffalo cosplay as the country's new CEO. Yes, windows were broken and offices were trespassed. But the media were all like "something like this has NEVER happened EVER BEFORE", conveniently forgetting the 1954 U.S. Capitol terrorist attack by a group of Puerto Rican separatists who shot up the House of Representatives. Or, even more recently, when dozens of anti-Kavanaugh protestors "invaded" (what a great word that is) one of the Senate office buildings with nary a peep of alarm by the Democrat-media complex.

And they've been very busy on social media today, frantically carving out exceptions for themselves to the "protests are bad" rule they are insisting they have always upheld. This is different, they say. This is an attempt to overthrow the government. Conveniently forgetting that overthrowing the government is antifa's explicit raison d'etre. Donald Trump incited these riots, say they. Conveniently forgetting to explain what he actually said that incited the protestors, turning them into rioters.

And this is a tired joke, but I'm going to say it anyway: given the immense size of the crowd (a million?) and the tiny number (50-100, I think) of protesters who actually broke into the building, why can't we classify Wednesday's rally as "mostly peaceful"? Especially since, at the end of the day, pretty much everybody simply went home. That was the supposed "coup"? That was the attempt to "take over" the government? Are you freaking kidding me? If that was the plan, then whoever plotted the coup was real bad at it.

VS. this:
Oh My, Look At This Fearsome "Insurrection": 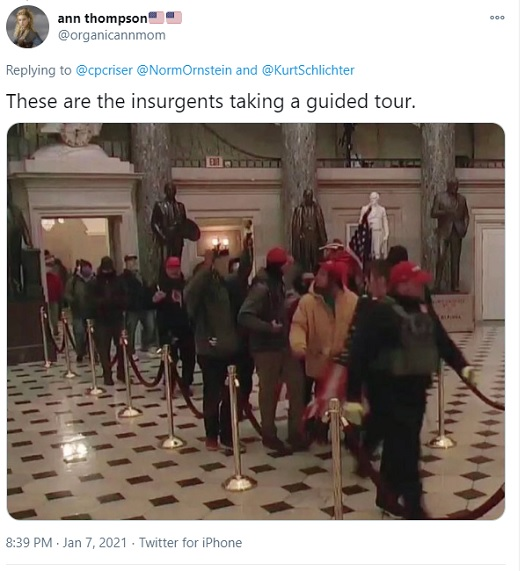 Posted by Moneyrunner at 8:42 AM