The perfect Democrat Ticket: Here It Is: #ClintonJennerDolezal2016

Thus, by the Power of Common Core, we humbly announce that three (3) is just a large value of two (2). We adjure you to vote for Clinton/Jenner/Dolezal in 2016, by write-in, if those odious, pedantic conservatives somehow infringe on your right to feel however you want about that age-old tool of patriarchal oppression, integers.
As the Really Hip Individual Currently Choosing to Retain a Male Sexual Identity Ezra Klein noted, the Constitution is, like, really old, or something. What better way to fight that Ancient Screed of Cisgender, Euro-Masculine Domination than to vote in a First Trimulierate in 2016? Progress is predicated upon the idea that anything conservatives esteem is on the target list for rhetorical saturation bombing. 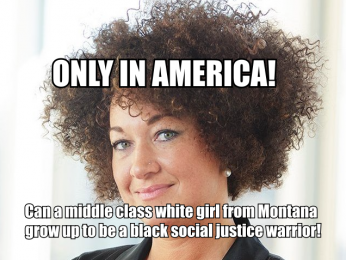 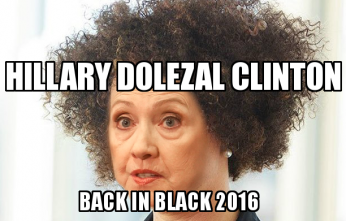 
Why are we not surprised a cult of race and gender which comes up with transgender also comes up with transnativeamericans and transblack? We have warned for years about the slippery slope and the reality of this cult outruns even our Onion-like sarcasm. That is almost by definition a culture of insanity. Anything is anything in this nutty world. Even we couldn't predict men posing as women would launch ideological attacks at the ideology which bore them and get a 40 yr. old lesbian music festival shut down and feminist plays canceled. Now just saying you're a women qualifies you for a female-only college. What nuttery will this cult come up with next? How crazy does our satire have to get to outrun the actual insanity of a thing which could produce Rachel Dolezal? These idiots have produced an actual transworld, and yes I am transphobic.


The Supreme Court's blessing of same-sex marriage is past it's sell-by date already even before the judges declare their fidelity to crazy.  The cutting edge of societal evolution is my right to marry my horse who is actually a trans-species differently-abled blue dragon, as am I.
Posted by Moneyrunner at 7:14 AM