Beam Me Up, Louis 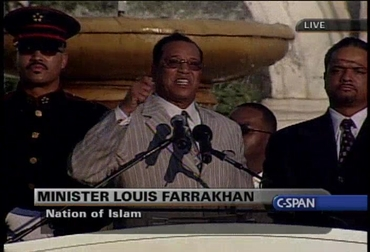 You can't blame Louis Farrakhan, the man behind the 1995 Million Man March in Washington, for seeking to have lifted the ban on his entry to the United Kingdom. And you can't blame Britain's High Court for last week's decision approving his petition. Indeed, the only wonder is that he was ever banned in the first place. After all, the Nation of Islam's leader can produce any number of glowing testimonials: "I have respect for him," said Al Gore's running mate, Joe Lieberman. Minister Farrakhan's message, said Jack Kemp, the 1996 Republican Vice-Presidential nominee, is "wonderful."

This would be the message that Judaism is the "Synagogue of Satan"? Ah, well, let's not get hung up on details. Senator Lieberman is an Orthodox Jew, but that doesn't mean he can't "respect" a guy who thinks Hitler is "a great man" and advises Joe's crowd to try figuring out what they did to bug him. "Everybody talks about what Hitler did to you," Farrakhan pointed out in 1994. "What did you do to Hitler? What made that man so mad at you?"

Senator Lieberman passed on that one, but did say recently that he feels sure the Minister "doesn't want to be a divisive figure." Thank goodness for that.

Thus, the complicated dynamic of American racial politics, of which Britain, for all its other woes, is blessedly free. It has black government ministers, black members of the House of Lords, black network news anchors, black pop stars and black sporting heroes, but no permanent elite of black grievance-mongers. On the sliding scale of African-American community leaders, Minister Farrakhan does not have the mainstream respectability of Jesse Jackson, the race industry's highest-earning shakedown artist, nor even of the Reverend Al Sharpton, the corpulent bouffant mob-inciting charlatan to whom Hillary Clinton, Al Gore and all other Democrat candidates must pay court. Yet arguably Farrakhan speaks for more of the black community than either of them.

According to one poll, 59 per cent of blacks think Farrakhan "speaks the truth." According to another, 40 per cent of the participants at his 1995 Million Man March said they had negative feelings about Jews. That's an impressive result, not because of the proportion in and of itself but because that's the number who felt sufficiently relaxed about their "negative feelings" to admit them cheerfully to The Washington Post. In fairness to the Nation of Islam, they don't just offend the Jew boys. At a "Black Holocaust Conference," one of Farrakhan's lieutenants, a "Professor of Egyptology," held up a painting of the Last Supper and called Christ's Disciples "a whole lot of white faggot boys".

When the High Court lifted the ban on Farrakhan, Fleet Street was roused to one of its instant fits of indignation. But to get steamed up about Farrakhan's bigotry is to miss the point: The Minister's status rests on blacks remaining a permanent victim class, and it's hard to be a victim unless someone's victimizing you. Farrakhan's attacks on Jews in particular and "white devils" in general are not just entirely logical, but also an excellent career move. The media have yet to record a single occasion when the Minister's diatribes before his large audiences have been met with a solitary boo. At Madison Square Garden, the line advising Jews to "remember, when God puts you in the ovens, it's forever" was, in fact, a big hit.

But let it go, I say. Objecting to Farrakhan as a bigot overlooks the more basic objection that he's a fruitcake. His Million Man March brought at least half that number to Washington, to stand in the street listening to a two-hour Farrakhan speech, in the course of which the former calypso singer went into a medley of his favourite numbers:

There in the middle of this Mall is the Washington Monument, 555 feet high. But if we put a one in front of that 555 feet, we get 1555, the year that our first fathers landed on the shores of Jamestown, Virginia, as slaves. In the background is the Jefferson and Lincoln Memorial. Each one of these monuments is 19 feet high. Abraham Lincoln, the 16th president, Thomas Jefferson the third president, and 16 and three make 19 again. What is so deep about this number 19? Why are we standing on the Capitol steps today? That number 19, when you have a nine, you have a womb that is pregnant, and when you have a one standing by the nine, it means that there's something secret that has to be unfolded...

You don't have to be a numerologist to spot the flaw in this theory: One secret that's easily unfolded is that in 1555 there were no black slaves on the shores of Jamestown, and no permanent immigrant settlements anywhere in North America; Jamestown wasn't settled until 1607, and no slaves arrived until 1619. But if nine is the pregnant womb and one is the known number of Jesse Jackson's love children, then six minus one equals five, and $5 million is the interest-free loan Colonel Gaddafi gave Farrakhan to start his "Power Inc" company in 1985, and if you multiply 5 by 19 you get 95, take away the 16, you're left with 79, which equals Farrakhan's two stately homes in the Chicago area plus his 77-acre rural retreat.

By the time Farrakhan had moved on to explain why the 440 cycles of the A tone in music were reminders of Egypt in the Eighteenth Dynasty, the US media knew they had a problem. The Minister has always had his whimsies -- he claims that once a month he's taken up into a spaceship orbiting the Earth to commune with Elijah Muhammed -- but faced with a man talking gibberish to the biggest gathering in Washington in decades, the American press froze. You can say a man's dangerous and demagogic, but, if you point out he's a loonytoon, what does that make the huge tide of people hanging on his every word? What does that make the popular black magazines like Ebony, which hailed him as one of the 20th century's "immortal giants", or Jet, which is as punctilious about his status as the Court Circular is about the Queen Mum's ("The Honorable Minister Louis Farrakhan Celebrates His 68th Birthday" ran the headline last month)? What does that make the leading black academics who were drooling all over the speech? It was, said Harvard's Cornel West, "depths of black love speaking to depths of black suffering." Black love, black suffering, we all love that storyline. But black nuttiness? No way.

So the major newspapers declined to report the Minister's numerological excursions, treating those portions of the speech like Victorian piano legs and obscuring them with discreet ellipses. The New York Times allowed that Mr. Farrakhan's address was "complex."

Racial politics in America is so toxic that white commentators can be respectful to, alarmed by or disappointed with a black leader but they cannot laugh at him. In the last week, every British national newspaper has gleefully mocked every Farrakhan idiocy; after decades of coverage, they've yet to be reported in the major American papers. What happens when it's deemed unseemly to point out how risible someone is? Farrakhan may never achieve his goal of a separate black nation, but he's already leading the way to a separate black reality, where the facts of whitey's world go unrecognized, and instead it's taken for granted that the AIDS virus was invented by the CIA to kill the black man.

Some on the right insist that, underneath the overheated rhetoric, he's an exemplary social conservative; some on the left admire him as a pioneer of Balkanized identity-group politics long before they were popular. But to all but the most partisan observers Minister Farrakhan presents a more basic conundrum: How nutso does an African-American community leader have to be before his fellow blacks hoot with derision and walk away?

Posted by Moneyrunner at 6:37 AM