Meltdown of a Superpower 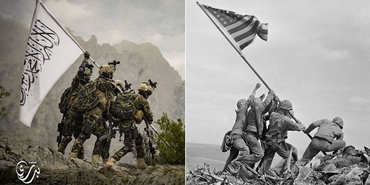 It is not just that General Milley and the Joint Buffoons of Staff cannot plan; they cannot execute. Compare the 2,500 Americans evacuated from Kabul over this last week to the 7,000 Americans and allies choppered out of Saigon in just nineteen hours. Can Milley do anything in nineteen hours other than call his tailor and order up his next row of ribbonry?

The Taliban know an American humiliation when they see one, and for the moment they're content to let Austin and Milley and the rest of Washington's worthless elite dig deeper. Aside from that, the mullahs are waggish enough to tease western media with hints of a "broad-based government", although we all know that in the end the broad-based government won't be based on broads. Other than that, the Sharia crowd confine any direct engagement with the Great Loser Satan to social media trolling, such as recreating (in American uniforms left at Bagram or elsewhere) Iwo Jima with the Taliban flag (top right).

Funnier than Colbert and Fallon and the other court eunuchs, but who isn't? And once again you get the feeling that these guys know us rather better than all the Ivy League tosspots of the world's most ludicrous "elite" know them. On the subject of which, see the Tweeted video of the brother of Afghanistan's president (the guy who fled with 169 mil in American tax dollars) joining the Taliban.

Enjoy it while you can: the big beards are not going to audition for Comedy Central indefinitely. Having won a spectacular victory, the beneficiaries of two decades of American "nation-building" will at some point want their international airport back.

This is a human tragedy for those desperate to flee Afghanistan. But, as I've said repeatedly, for everyone else this is a story about America. We like to think of our site as a big-picture pad, so what would that be in this scenario? Well, the big picture is that, after the dissolution of the Soviet Union, the United States blew its unipolar moment and has chosen to surrender the world, after half-a-millennium, to post-western dominance. Whatever the truth of Biden's charge that the money-no-object Afghan National Army went over to the other side, there is no question that key elements of American national power have gone over to China's side: the Chamber of Commerce, Hollywood, the NBA, not to mention the Wuhan Institute of Virology's protectors at the CDC and NIH; oh, and the Five Eyes intelligence alliance, at least two of whom have checked out with respect to anything to do with China...

Posted by Moneyrunner at 6:45 AM