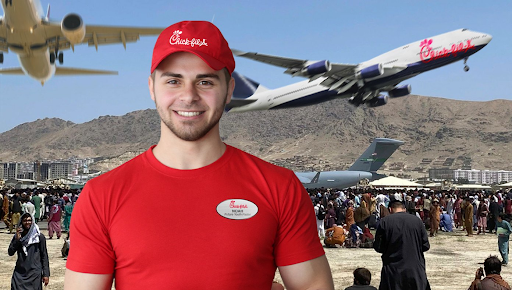 KABUL—After the government spectacularly botched the evacuation of Afghanistan, Chick-fil-A scrambled to the rescue and was quickly put in charge of the operation. Within a few hours, every single American at the Kabul airport was comfortably seated on a commercial airliner and munching away at a delicious Chick-fil-A sandwich and sipping on a sweet tea.

Chick-fil-A employees took over operating the air traffic control tower, managing the crowd of people, flying the jets, and, of course, serving delicious Chick-fil-A food to everyone gathered at the airport.

"Oh, it's my pleasure," said one Chick-fil-A employee as he happily welcomed several hundred Americans on board an official Chick-fil-A airliner. "Welcome aboard! Will you be having the spicy chicken or the original today? And can I interest you in a frozen lemonade?"

While citizens and refugees who were evacuated by the U.S. government were forced to huddle together in massive cargo jets, Chick-fil-A's jets had first-class seating throughout, and yet somehow still miraculously held hundreds of people on each flight. The friendly employees tended to every need of the previously stranded Americans throughout the flights, offering complimentary food, beverages, back rubs, and trauma counseling to the people callously abandoned by the Biden administration.

Each jet also had a fun play area for the kids, and soothing Christian muzak was pumped into the cabin to the delight of all.

At publishing time, sources had further confirmed that all the Muslims at the airport had been led to Christ by the Chick-fil-A employees.

Let's face it, the average small-town Kiwanis Club could have done better than the Team Biden.