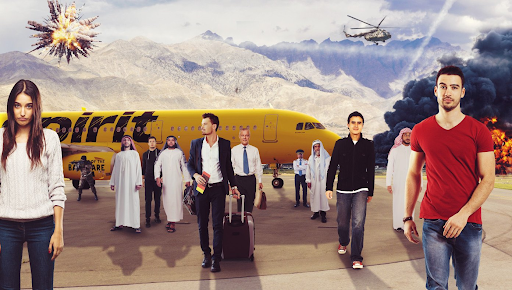 "Talk about whiplash," said defense contractor Jonathan Green. "One moment I'm crying for joy with family, thinking we've escaped this nightmare...the next moment, tears of despair. We're told we can leave the sixth circle of Hell, just to wind up in the seventh? Lord, have mercy!"

Cowering in fear from the yellow plane, the Taliban allowed Spirit Airlines to land in Kabul after hearing ghastly horror stories of prior passengers. "Yeah, uh, we aren't messing with those guys," said jihadist Abbad Manaf. "Stories gave me nightmares. They can come and go as they please if they'll just leave me alone. Oh yeah, I almost forgot, Allahu Akbar!"

Per sources on the ground, the Spirit Airlines plane has remained on the runway for two days now with no takers. "At least with the Taliban, we have some chance of avoiding torture. But you get on that plane, those attendants have 15 hours to go at you with that rubber hose," said IT contractor Nathan Gleitz. "No joke, they harvested a kidney from the guy next to me. They took my plasma, and then I had to land the plane because they quit using pilots to save some cash. Nah man, I like my odds better against the Taliban."