Police Work in 2021: When You Don't Arrest Anyone, No One Gets Hurt 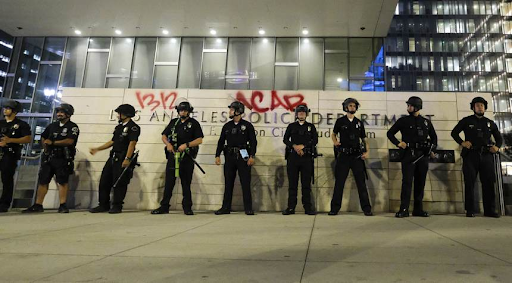 but consider the recent woes of an LAPD officer who, after going in pursuit of a suspect who minutes earlier had tried to murder a fellow officer — in the lobby of the police station — was found to have used excessive force while arresting him. Did he shoot the suspect unnecessarily? Did he choke him? Did he beat him senseless with a baton? No, he hit the suspect with his fist and forearm. Keep in mind that the suspect had fled the police station after wrestling with a cop, taking his gun from him and trying to shoot him with it. He then exchanged gunfire with another cop before speeding off in his truck.

Officers were pursuing the man through the streets of San Pedro when he abruptly stopped and started to walk away from the truck. One can understand the desire among these officers that they not have their guns wrestled away as their colleague’s had been, but one of them, say LAPD chief Michel Moore and the police commission, was too vigorous in his application of the rough stuff and must be punished.

And there you have it, the current state of police work in America summed up in three Los Angeles incidents. When you just let the crooks get away, no one gets hurt, there’s none of that pesky paperwork to fill out, and there’s no uproar in the media. Everyone’s happy, right? Good luck, America.